File under “A Venn Diagram without pizza in it???”

So a couple days ago some different parts of my life which have felt relatively unconnected slid together, and for about 60 minutes I felt an incredible sense of bliss and satisfaction. It’s a simple thing that made me feel this way: I listened to a podcast. But some of life’s greatest gifts come in humble packages, right? And maybe I am overstating this shit a tiny bit, it’s just that listening to intelligent, aware and hilarious people talk about things that are important in my life is exciting.

Here’s the deal: Russell Simmons was a recent guest on one of my favourite podcasts, The Champs. What I already knew about Uncle Russ is that he co-founded Def Jam Records with Rick Rubin (big important rap music shit). What I didn’t know about Simmons is that he quit smoking angel dust about 25 years ago and started meditating. He’s been writing books about and sharing the practice of meditation for years. He hooked up Oprah and Ellen with a teacher from David Lynch’s meditation school who taught meditation to them and all their staff. And, once they reached an age where they could sit and shut up for a few minutes (8-10 yrs old), he has meditated daily with his two daughters. Children learning to meditate is very cool (I first began to think so when I watched that doc about the champion spelling bee kids — uhhhh, Spellbound, I think — one of the spellers was a daily meditator and he was hella smart and very chill).

I was super jazzed to hear someone who has been such a huge player in the game and an empire builder talk about ideas of happiness, attachment, materialism and success in what felt to me like a real and balanced way. Sure, you could be a real Skepticon and say that anyone with 400 million in the bank can afford to be a little detached, but I’d wager the truth is that more often people go the opposite way, and are inclined to let their wealth define their identity.

Even better, in another interview, Bill O’Reilly apparently tried to get Simmons to pass some kind of judgement on Beyonce for singing about having limo sex with her husband (classic), and Russell wasn’t having any of it. A) Ain’t nothing wrong with that, and B) Bill, what do you care? Simmons, from his “enlightened” seat, didn’t condemn the hedonistic, acquisitive culture of rap and pop music, and didn’t seem to need to separate himself from it, either. Instead he talked about how the artists who are singing about money, sex, hoes, drugs and violence are simply reflecting the consciousness of the society they are a part of. This jives with one of my life’s primary philosophies, which is why the fuck would you spend any energy worrying about or judging what other people are up to? I think often of the yogic, uh, saying (?) “Where the mind goes, there goes prana.” Which means that wherever you focus your mind, naturally your life’s energy follows in that direction. So spend your time thinking and worrying about what is going to build you the life you want and grow you into the person you want to be. Other people are their own responsibility. Hi fives, Russ!

Really, there is even more to chew on in this episode. Simmons talks about the function and benefit of stillness in the mind, the addictive nature of externalizing your markers for success and happiness, and in general is a wise and genial chiller. Give the ‘cast a listen here.

And if you like stand-up comedy, rap music, and/or charged inter-personal host dynamics on a podcast, check out other Champs episodes by clicking on the image below. 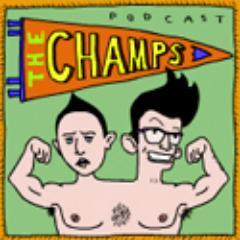 (one thousand apologies for the shitty thumbnail, they apparently have better things to do than render a clear image of their logo for the world wide web)